Nice review of the MARK THOMAS show in the Columbus Dispatch. 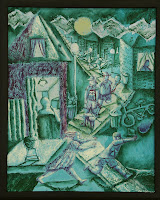 Great article on my new show in "ALIVE",
CLICK HERE:
http://www.columbusalive.com/live/content/features/stories/2009/07/09/ca_ar_scape.html?sid=108
Posted by LINDSAY GALLERY at 11:47 AM No comments: 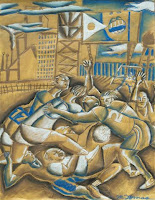 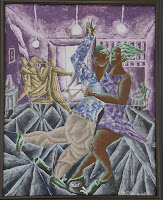 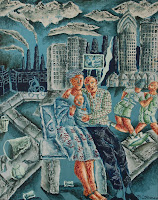 {scroll down for more
info on the opening reception} 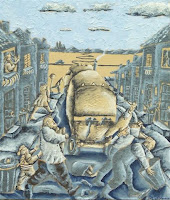 Posted by LINDSAY GALLERY at 11:50 AM No comments: 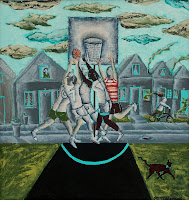 I have rarely been as excited about an artist as i am about Mark Thomas. The level of technical ability... the influences of American regionalism and WPA art made it hard for me to believe that he was self-taught, but he is!

Mark was born in 1967 in southern Ohio and lives on the east side of Columbus. He looks to his neighborhood for visual inspiration. Children playing, people drinking and dancing, trash collectors and construction workers tend to be the subjects of his work. Like the American regionalist painters of the 30s and 40s Mark is interested in the "American character." The character that he sees is in people of all races playing, partying, working , even brawling.
In his words: "There is something special about ordinary people doing ordinary things."

Thomas has clearly looked at a lot of art and absorbed the influences of different genres. And while he says he likes cubism, he seems to be completely unaware of artists like Thomas Hart Benton and Marsden Hartley. Perhaps he saw WPA era murals or prints as a child. But whatever the influences, he has combined them into his own unique style... not quite folk or fine,
a true "contemporary self-taught" artist.

Mark works in acrylics, pastels and charcoal... but also oils which many self-taught artists avoid.
This is his first one-man show, but i believe he's ready to join the ranks of the great African American self-taught artists from Columbus.
Posted by LINDSAY GALLERY at 8:16 AM 1 comment: