Joey Monsoon is a storyteller…. but he does not paint complicated visual scenarios, or give clues to his narratives in the actions of his figures. Joey’s stories are told in the eyes of his subjects, and in the framework that supports their skin. It’s rare to see a self-taught artist so interested in the anatomy of his people; it’s as if he has performed ghoulish autopsies to see what makes them tick.

Monsoon fell in love with drawing heroes and characters as a child… he drew obsessively and has never stopped. Later in he was drawn to the expressionist portraits of Egon Schiele, the energy of graffiti and the underground art of Robert Williams.

In the 1990s Joey began experimenting with paint, a laborious series of trials and errors with acrylic and gouache. In 2005 his work started appearing in group shows, garnering so much attention that he was voted ColumbusUnderground.com’s “Artist of the Year” in 2008 and again in 2009. This is his first show at LINDSAY GALLERY.

In his own words:

My figures and portraits hover somewhere between reality and myth. Their worldly weariness is revealed through a dream-like lens. They are not so much portraits of people as they are portraits of emotional triumphs and failures. We don’t always know their stories, yet in our gut we know how they feel. 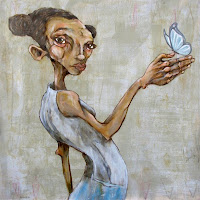 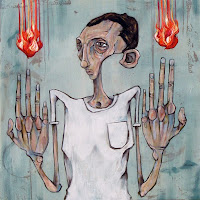 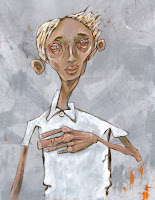 Posted by LINDSAY GALLERY at 2:57 PM No comments:

Posted by LINDSAY GALLERY at 12:49 PM No comments:

Great article by Ann Starr on our BRUCE NEW show in the OTHER PAPER.
click here
Posted by LINDSAY GALLERY at 11:00 AM No comments: