A few paintings from our upcoming show: 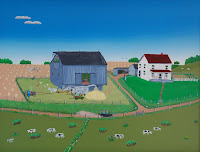 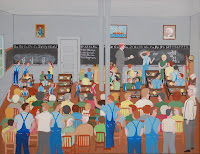 
Paul Patton {1921-1999} grew up in the tiny Muskingum County village of Rix Mills, Ohio. It was a place where kids walked to a one room schoolhouse, worked in the fields and spent their playtime outdoors in the beautiful Appalachian foothills.
Patton went on to be a B-17 pilot in WWII and had a long career in education. When he went back to Rix Mills in 1985 he discovered that the countryside he loved had been dramatically changed by strip mining. The hill against which his village nestled had been entirely stripped away. Fearing that the way of life he knew would be forgotten, Patton began putting his memories on canvas.
With no formal training, he produced over 500 paintings that so touchingly capture a time and place gone by, that they are an artistic and historical treasure.


Posted by LINDSAY GALLERY at 1:46 PM